We've had everything from Top 10 and Top 20 D-1, D-2, D-3, NAIA and JUCO teams attend this tournament. The unique format features the Open Division for top teams' starters as well as a Freshman / Sophomore Division for wrestlers who are working their way onto the starting lineups. Wrestling on up to 14 mats, begins at 9:01 AM ending by 5:00 - 5:30 PM

Presented By Resilite, The Mat Company

STAR CITY OF THE SOUTH

This tournament started as the Hokie Open in 2008 and the tenth year's edition continues as the Southeast Open wrestling tournament at the Cregger Center just off I-81 in Salem, VA 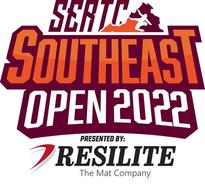 Follow the tournament results LIVE online with FloWrestling's FloArena. Take a look at past tournaments results...

Registrations are CLOSED. Payments MUST be made online during Registration Period.

THIS IS AN OPEN TOURNAMENT.  Tournament administrators let anyone compete in either Men's Division (even though one is called the Freshman/Sophomore  division) thus it is an open in which athletes can compete unattached without triggering a season of competition.

SAME VENUE FOR 2022 - ROANOKE COLLEGE: Click on INFORMATION link below.

Talk about VA Tech Wrestling and more! Become a fan on Facebook!

Using FloWrestling's  FloArena tournament management software, fans can follow ALL the action from computers, tablets and smart phones world-wide as the action heats up at Roanoke College's beautiful Cregger Center in Salem, VA, just off of I-81 about 35 miles north of Blacksburg, VA.